When we first moved to Kuşadası 10 years ago, Alan & I agreed that we would have no house pets. In England we’d had a much-loved miniature long-haired dacshund and a cat, for whom we had found good homes, but we intended to explore our new country and pets would be too tying, we felt. Then a few weeks after our arrival, in walked Alan with a wooden seed tray, covered with a cloth. I assumed that my beloved had brought me a present and eagerly approached to look . . . the cloth moved! I lifted the cover to find a minute, flea-infested scrap of kitten with eyes barely open. I was not impressed!

Alan explained that Chris, the feisty Sheffield-born owner of Gossips cafe, had thrust the box at him and ordered him to bring the kitten home (on the dolmuş!). There was no messing with Chris – she used to go out on the pavement, spot expats approaching and order them into her cafe – she would not take ‘No’ for an answer! She was passionate about cats and turned the mezanine area above her cafe into a charity shop, selling second-hand clothes and other items, and she held quiz nights on a Saturday – all profits went towards neutering the cats of Kuşadası.

So I dusted the kitt with flea powder (which I now realise is the wrong thing to do!) and having neither feeding bottles (they didn’t exist in Turkey in those days) nor kitten milk, fed her diluted cows milk through the finger of a rubber glove. Against all odds, Charley has survived to this day.
We used to frequent Gossips, to get to know the expat community, and Chris was always there, bustling around. We discovered that we shared the same birthdate, which we joked about. Chris sadly died a few years ago, and Gayle & Tuncay bought Gossips, which became No 8, specialising in delicious cakes, and kept upstairs open as a charity shop, carrying on Chris’s good work.

The charity ARK (Animal Rescue Kusadasi) had been approved at the beginning of April and on 25 April we held a member recruitment meeting in No 8 – when to our great surprise Gayle & Tuncay announced that they had just sold their business to Hakan, who specialised in providing delicious fish ‘n chips, and who has since then has renamed his restaurant ‘The Salt Box’. They also said that Hakan was keen to keep the upstairs charity shop going, but didn’t have the resources to run that as well as his business . . . so he would be happy if ARK volunteers would run the charity shop for him, with proceeds continuing to be used for cat neutering. 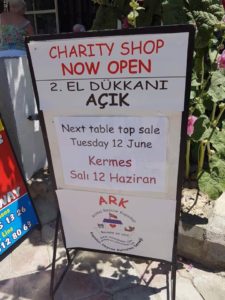 Our team of volunteer assistants is gradually increasing . . . and they worked miracles. When I first ventured upstairs my heart sank . . . piles of clothes and shoes were strewn all over the floor, following the previous table-top sale and customers rummaging through to find a bargain. However, within a week order began to be restored and now it looks amazing. Do please visit our charity shop in Salt Box Restaurant (formerly No 8 and before that Gossips . . . in Kuşadası town centre next to the 3.5tl shop) and support our work helping Kuşadası street animals, while treating yourself to the best fish ‘n chips in Kuşadası. Popular table-top sales are also held twice monthly – watch out for advertisements.

And at times when I’m upstairs at The Salt Box, sorting through donations, I am sure that I can hear a deep chuckle behind me . . . I turn around and there’s nobody there. But I know that it must be my ‘twin’ Chris, who has pulled a few strings to ensure that her animal charity legacy continues . . . she still won’t take ‘No’ for an answer . . .